I went to the Theatre Royal Windsor on Monday 1st February to watch New Jersey Nights.

I knew I was going to enjoy it before I even arrived, because it was going to be similar to Jersey boys and although I haven’t seen it, I know all the songs and have seen snippets of the show.

New Jersey Nights is a show celebrating the music of Frankie Valli and the Four Seasons. During the show they sang huge hits from the 60s which I love because surprisingly 60s songs are some of my favourites, I don’t like anything in the charts these days really, which is weird because I’m only 23! 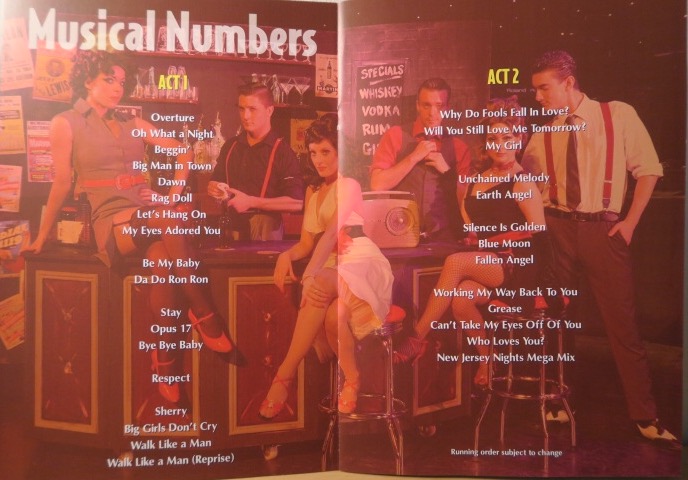 My favourite song is ‘Will you still love me tomorrow’ which is actually a song that I sing a lot when I go to open mic nights, so I loved hearing it in the show and it was a very different version to what I am used to.

This was sung by Simon Schofield- which brings me nicely to a very funny part during the show.

The 4 main guys were about to sing ‘Blue Moon’ acapella, Simon started them off, but he started in a really high key, which set them all wrong. The guys all started laughing because it was so funny. They explained what happened and the audience were all laughing with them. At first I wasn’t sure if it was set up and a part of the show, but I don’t think it was, it made for a very entertaining section of the show. When the boys tried it again and got it right, the whole audience applauded. One of the boys kindly said ‘If there are any reviewers in tonight, his name is Simon Schofield. So thank you for that! haha 🙂

A massive well done to the dancers, they were all wonderful and completely lifted the show, I couldn’t take my eyes of off them. Especially in their beautiful costumes.

Chloe Gatward also sang a couple of songs such as: ‘Be my baby’ & ‘Da Do Ron Ron’ She could really sing, she had such a beautiful voice which really complimented each song.

All in all, we had a wonderful night, we were up dancing and singing at the end among the rest of the audience shouting MORE! This is a must see show for any musical or 60s lovers out there.

They are currently at Theatre Royal Windsor until Saturday 6th February, then they are moving on to Norwich Theatre Royal on Monday 22nd-24th Feb, then to the Darlington Civic theatre from 25th-27th Feb.

Thank you all for reading, please don’t forget to check out my social media channels below…